Now, as you know, I am a bit of a wildlife fan. BDH calls me a Crazy Squirrel Lady, and yes, it’s true, I will cop to having a fondness for the fuzzy, manic rodents. But Tilty is a special case.

Now, about nine months ago, a little squirrel showed up in our yard. He was very wobbly on his feet. He had impaired balance, and struggled with staying upright, especially on fences. He was thin and could not defend himself well, and could not fight for his place in the pecking order when it came time for all the crazed squirrels in the yard to fight over peanuts. And, as he got closer and the way he behaved compared to other squirrels, it became evident that perhaps his eyesight was impaired, also.

As he was in the yard, a few days in a row, I became concerned that perhaps he might be diseased or dangerous in some way. I mean, he’s wildlife, right? So I did a little internet research. Yes, squirrels can be rabid, or can have some nasty disease from exposure to raccoon poop.

But Tilty, as we came to call him the more he came around, wasn’t showing any of the symptoms of illness. He was just very wobbly.

And — unsurprisingly, once you really think about it — there are apparently quite a lot of these wobbly little squirrels in the world. Because squirrels tend to spend their time in high places, and falling from high places results in brain damage and other serious injury.

This is what we believe ails our sweet Tilty.

So, we’ve been feeding him over the past nine months, and he’s been getting stronger and healthier. His wobble is far less pronounced, although he hates trying to navigate in the snow. It vexes him, because the ground is uneven and because it hides the peanuts from his poor eyesight. He gets frustrated in the snow and stomps about and throws little squirrel tantrums. It’s very cute.

He is also getting stronger and therefore learning to defend himself. He’s still unsure of himself and his poor eyesight makes it easy for him to be startled when other squirrels are being typically skittish and nutso around him. So when I feed him, it’s on a flat patch of the yard in front of our patio door, and he’s now learning that this is His Space. He has no compunction about laying the smackdown on many of the squirrels who try to enter His Space and eat His Peanuts. Sometimes he will let the smaller, weaker squirrels in. And sometimes he gets chased off, especially when it is snowy and he’s unsure of his footing. But generally, woe betide the squirrel who crosses Tilty on His Patch.

He comes over when I come out, and waits for his breakfast. Sometimes, he gets a bee in his bonnet and he refuses. He puts me on ignore and he’s all NO NO NO I A BIG BOY I EAT WITH MA PEEPS and he insists on feeding with the other squirrels. That’s okay. I can respect that a special needs kind of guy wants as much normal as possible. I get that.

But, on days like today, when it was icy yesterday and now the snow is coming down, Tilty waits for all the others to leave. Then he comes into the yard, and right up to the window, and he’s all BRING ME MAH FOODS, WOMAN!

Of course, I comply. He’s my special favourite, after all.

I was determined when we first met Tilty that we’d feed him and help him get through the winter. So we do. I go to the local bird store and pick up a big bag of peanuts every month. Everyone gets fed – birds, chipmunks, squirrels — but especially, ALWAYS our little tippy tilty boy.

Some days I mix it up, and throw out some old baking goods, like old nuts or raisins that are past due. Or I will throw out old breadcrusts and buns that have been in the freezer too long. Some days he turns up his nose at what’s offered and is all WHAT IS THIS SWILL I WILL NOT EAT YOUR RAISINS! And then some days he’s all OOOH BREAD! and he takes a big ol’ hunk of bread all the way home to the woods.

He used to stop at the end of feeding, dig up a stone from the poolyard or garden, and carry that home to his nest or drey. Apparently they do that. Some people think rocks provide heat or drainage or stability in a squirrel’s drey. We like to think, with all the stones Tilty has carried home, that he’s built himself  THE MOTHER OF ALL SQUIRREL CASTLES out there. With a FORTIFIED WALL. And maybe even a MOAT.

Today, Tilty came, but I was upstairs working on something, and did not happen to see him come. It was only until I looked out and saw his slightly wonky gait as he was making his way home that I realized he had come. So I opened the door and called to him. And, sure enough, he made his way back. In his own time, of course. He must have been hungry.

So here’s a little video of our boy. Sorry for the shaky hand and the running commentary… I talk to Tilty because a) he’s adorable, but also 2) we’ve had hawks try to make lunch of our rodent friends in the yard (and once succeeded — it was like a CSI episode out there) so I keep watch to discourage them from coming around. 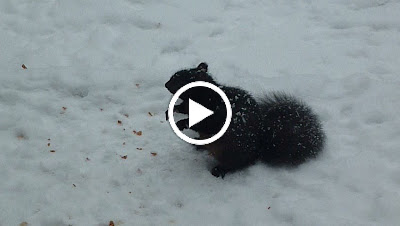 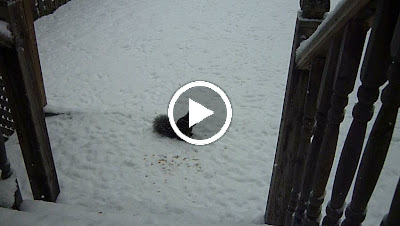